Our review unit’s configuration starts with Intel’s Xeon E5-1630 v3 CPU (the “1” in the “1600” series denotes “1S”). The E5-1630 v3 represents a very sensible sweet spot, balancing the number of CPU cores (four) to speed parallel processing throughput with high-frequency operation (3.7 GHz), for fast execution of the single-thread code that’s still common in CAD computing for such tasks as parametric computing. The other key system processor, the GPU, is a very capable NVIDIA Quadro K2200, a card smack in the middle of NVIDIA’s professional graphics range.

The HP Z440 Workstations came configured with 16 GB of 2,133-MHz DDR4 memory, backed up by not one but two drives, the more notable of which was a high-performance, PCI Express–based, 256-GB Z Turbo drive for the OS and applications (the bigger 1-TB SATA hard drive typically takes responsibility for data storage). The presence of the Z Turbo drive requires one extra fan for additional cooling.

The HP Z440 Workstations connectivity specs are typical for a machine of this caliber and should be sufficient for most users. The front panel offers three SuperSpeed USB 3.0 interfaces, along with the expected analog audio-in and -out minijack ports. In the back, users can access four more USB 3.0 ports and two USB 2.0 ports, along with another set of audio I/O ports, two legacy PS/2 (mouse and keyboard) ports, and a Gigabit Ethernet interface. HP also supports Thunderbolt 2 and a 15-in-1 media card reader as options (though none were included in our configuration). 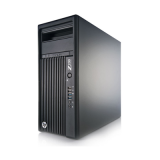