For this review, we have been provided with a pre-production unit of the HP ZBook 17 Mobile Workstation . Some noticeable changes might still occur before the final version hits the shelves, a thought which should be taken into account when glancing at our ratings of the ZBook 17.

The variety of features with which the HP ZBook 17 Mobile Workstation ships may be unusual, but not unattractive. For starters, HP has chosen to include a Quadro K610M, Nvidia’s low-end professional graphics board into this large chassis (instead of a usual middle-class or high-end GPU), a choice which will remain the same for the final version as well. On the other hand, it has equipped its new mobile workstation with a DreamColor display, an IPS screen with extraordinarily great color space coverage, which is a true (and often very costly) rarity even in expensive business laptops. Similarly, 16 GB of RAM is great, as is Intel’s Core i7-4900MQ CPU, but 128 GB of SSD storage may not be enough for all application scenarios – at least, more HDDs and SDDs can be added. 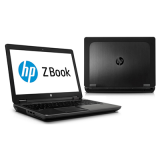 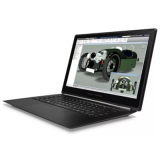