The Lenovo IBM ThinkStation P500 Workstation is a single-socket tower workstation. Intel’s C612 chipset supports one Xeon E-5 1600 or 2600 v3 processor with up to 18 cores and quad-channel memory. A maximum storage capacity of 24TB’s is supported along with up to 512GB of memory and a generous supply of PCIe slots for enhanced IO.

The IBM ThinkStation P500 Workstation is ISV certified to perform effortlessly running intensive software applications used by design engineers, financial analysts, and geologists. ISV is an acronym for Independent Software Vendor and means these independent software vendors have tested the software, hardware, and components to ensure stable and reliable performance.

For arduous computing tasks, Lenovo recommends installing a co-processor card such as Nvidia’s Tesla K20 or K40. Adding additional graphics cards will enable support for multiple monitors. Several USB 3.0 ports located on the front and back of the system means you get blazing quick copies of large files and a flawless connection between external devices.

Using all 8 DDR4 DIMM slots loaded with 32GB DDR4 modules provides up to 256GB of memory. However, with the release of 64GB modules the capacity jumps to 512GB of RAM! Additionally, quad-channel memory supports data transfer speeds of 2133MHz, ensuring rapid processing of data and graphics. 16GB’s of RAM is typically enough to create basic CAD files, but with support for up to 512GB you can always add more.

A Flex connector features 2 front bays that enable an additional two SSD drives. Lenovo’s Flex trays inside the chassis of the P500 work with two 2.5 inch hard drives, one 3.5 inch hard drive, or one of each per tray. This same Flex connector also supports an optional 256GB M.2 SSD that’s five times faster than SATA technology.

Expansion features are essential to all professional grade workstations and the P500 is no exception. rters, you get 7 expansion slots: 2 PCIe x16, 2 PCIe x4, 1 PCIe x1, 1 PCI, and 1 Flex Connector-there’s plenty of room to grow with this machine.

If graphics processing is your game, then you will be delighted to find the P500 can run with two Nvidia graphics cards. The system also supports an optional video co-processor including Nvidia’s Tesla K40 or K20 to accomplish data intense tasks. 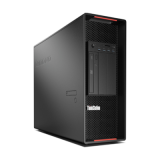 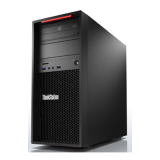 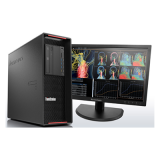